Ars Shimura was established in April 2013 in Okazaki, Kyoto as a place to learn the world of dyeing and weaving, which Fukumi Shimura and Yoko Shimura created, through art experiences. The origin of Ars Shimura dates back to the time when Fukumi Shimura’s mother, Toyo Ono was still alive. Toyo Ono established artistic relationships with the folk crafts movement formed by Muneyoshi Yanagi, Kamigamo art crafts association of Tatsuaki Kuroda and Goryou Aota, and Kenkichi Tomimoto. She established ‘Showa Gakuen institute’ as a place to practice ideal education herself.

Fukumi, who joined the dyeing and weaving industry influenced by Toyo, lifted ‘pongee weaving’ to the level of ‘art’ and made it thrive. As a result, she created a unique world of beauty. Her daughter, Yoko followed the philosophy of Goethe, Steiner and others and although she was on the same path as her mother’s, she came to pursue universalistic beauty beyond the concept of Japanese traditional Kimono. 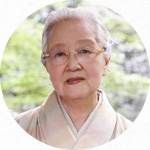 We learn many different kinds of things through dyeing and weaving.
Plants ( colour ) animals ( thread ) and minerals ( mordent ) are not only materials but also providers of life forms.
In response to that, we make things using intelligence and sensibility. Not making beautiful things but the things which we make in this kind of process by putting in our souls learn how to become beautiful. If we go off the path, no beauty will come. 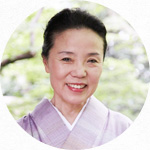 Dyeing and weaving largely depends on their relationship with threads.
We dye threads and warp the threads. Then before we put the treads on a loom, we wring, bundle, stretch and loop them. Finally we weave the threads. Afterwards, threads get tangled or cut, but if you put them back in order patiently, you will see the light on the other end and you will know which direction to follow.
The process in which threads become textile is somehow similar to the process of human lives.
I would be delightful if we could share the joy and struggles of working with threads with you. 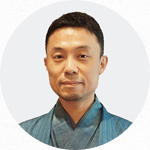 I believe a ‘DRAMATIC’ encounter can happen to anyone regardless of one’s age. Ars Shimura is a school open to anyone with or without artistic experiences. If you are willing to devote yourself to the course, please do not hesitate to knock on our door.

Born in Kyoto. Completed a doctor’s course in law in Kyoto University. He has worked as an assistant for a professor in the university and he was an invited researcher at University of Warwick in the UK. In Kyoto University’s graduate school, he studied the 20th century philosopher, Karl Popper. He established Ars Shimura with his grandmother, Fukumi Shimura and his mother, Yoko Shimura.

This is the place where a gathering of people can share many discoveries and moving experiences with each other through handiwork. I would like to help you to be able to learn various types of things from familiar affairs to cultural matters deeply putting your hearts close to each other.

I dye threads with the colours of plants’ lives and put my heart into each weaving action. Through handiwork, one faces oneself profoundly. I hope I can help you spend a rich time like that.

The gloss and texture of threads, colours provided by plants, the sounds and rhythms of weaving …… through the process of weaving a piece of fabric, feeling various sensations connected to weaving and dyeing through our five senses, I would like to get closer to the truth of nature with you.